WE WANT your art, books and comics !

We buy art, books and comics. Any quantity considered. No collection too large or too small.

So please get in touch if you wish to sell your art, books or comics.

British History (Doughty)
The Voyage of The Mayflower (Original) (Signed)

AT LEAST 50% OFF
See ALL COMICS or British comics, American comics and French comics, including comics sets and Annuals 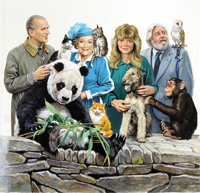 The Marvel Vault: A Visual History